I’ve been watching Halt & Catch Fire recently. Not sure how it didn’t cross my “media radar” until now, but I’m nearly through the first season as of writing this and it’s been excellent. Would highly recommend.

In S1E4, there is celebration due to getting below 400ms response time. Referred to as the “Doherty Threshold”—named after Walter Doherty at IBM in the ’70s—it’s the threshold that keeps users engaged & productive.

Doing some research outside of the show, it appears that the 400ms is somewhat arbitrary from the writers. Looking at the original article, the exact value of 400ms doesn’t appear anywhere directly. However, looking at a specific figure, the engagement (transactions/hour) increased dramatically a bit below half a second. Give this context, the 400ms from the show seems reasonable. 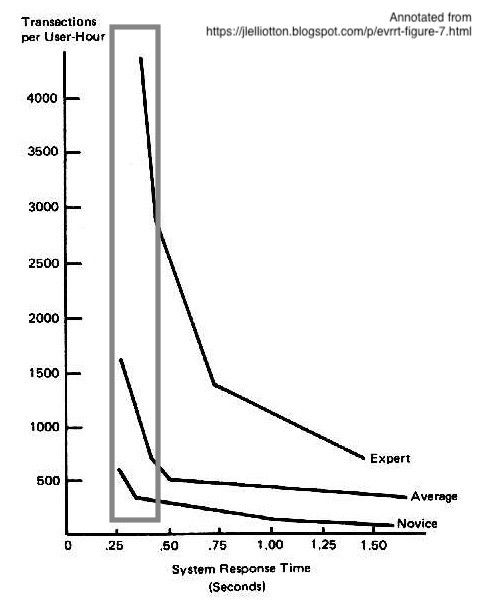 While I wasn’t familiar with the Doherty Threshold prior to watching the show, I have heard of 100ms and under being perceived as instant. In particular, the instant.page project—which I use on this site—leverages this along with just-in-time preloading to make navigation across pages feel “instant.”

I continually find UX gems like this fascinating. Even more so when encountered in a TV show.